skip to main | skip to sidebar

Haven't posted here in forever. Been racing triathlons, having fun, made some podiums. Had a nasty bike wreck in August, resulting in a separated shoulder and broken wrist. Came back to race (and win) a baby sprint tri about 6 or 7 weeks after the wreck. Started working with a coach in December who I admire and respect beyond words. He was instrumental in rehabbing my shoulder and now I swim better than ever before. So, been training for Ironman Texas (half distance) with E and a tight group of friends since December. 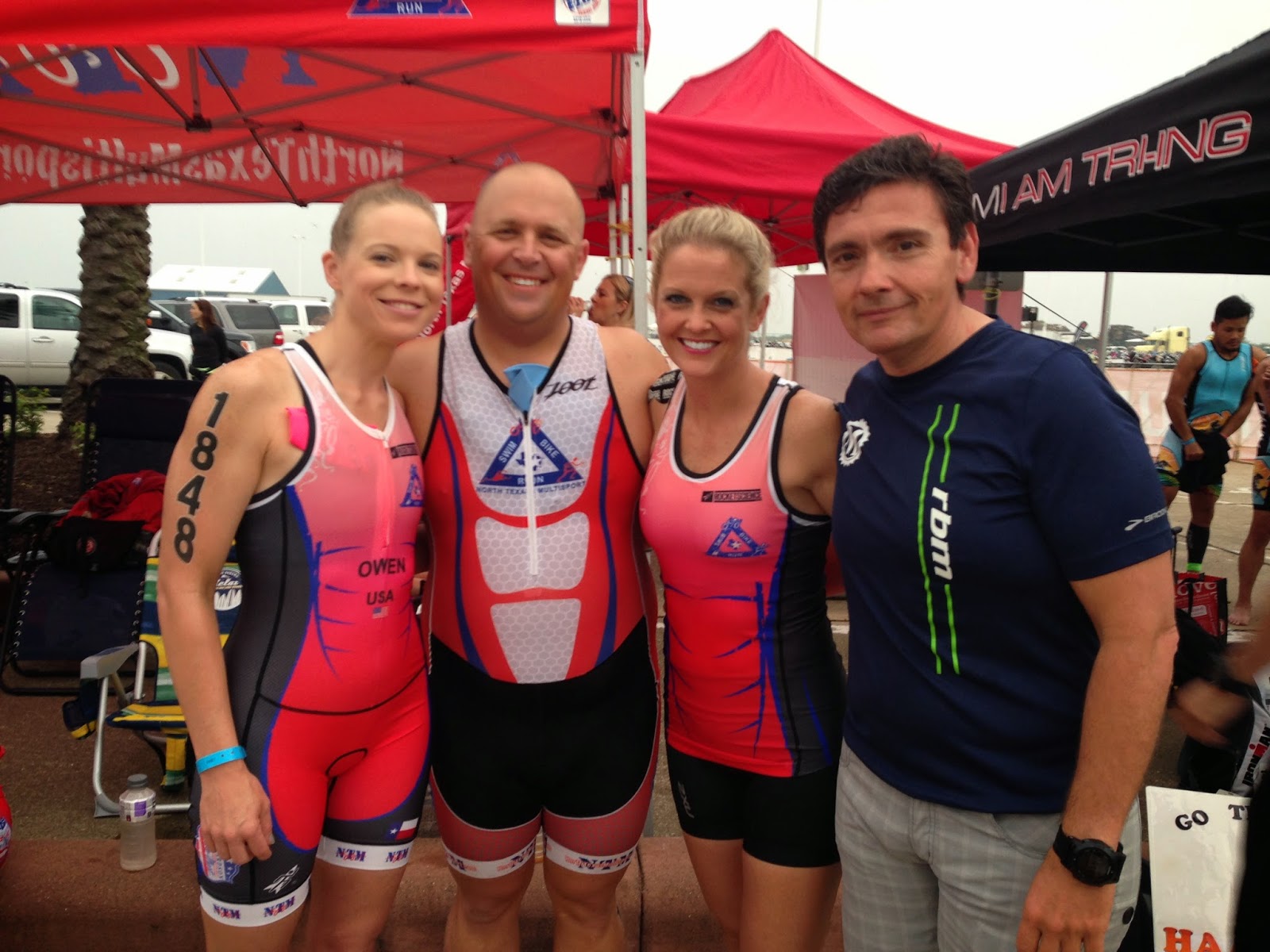 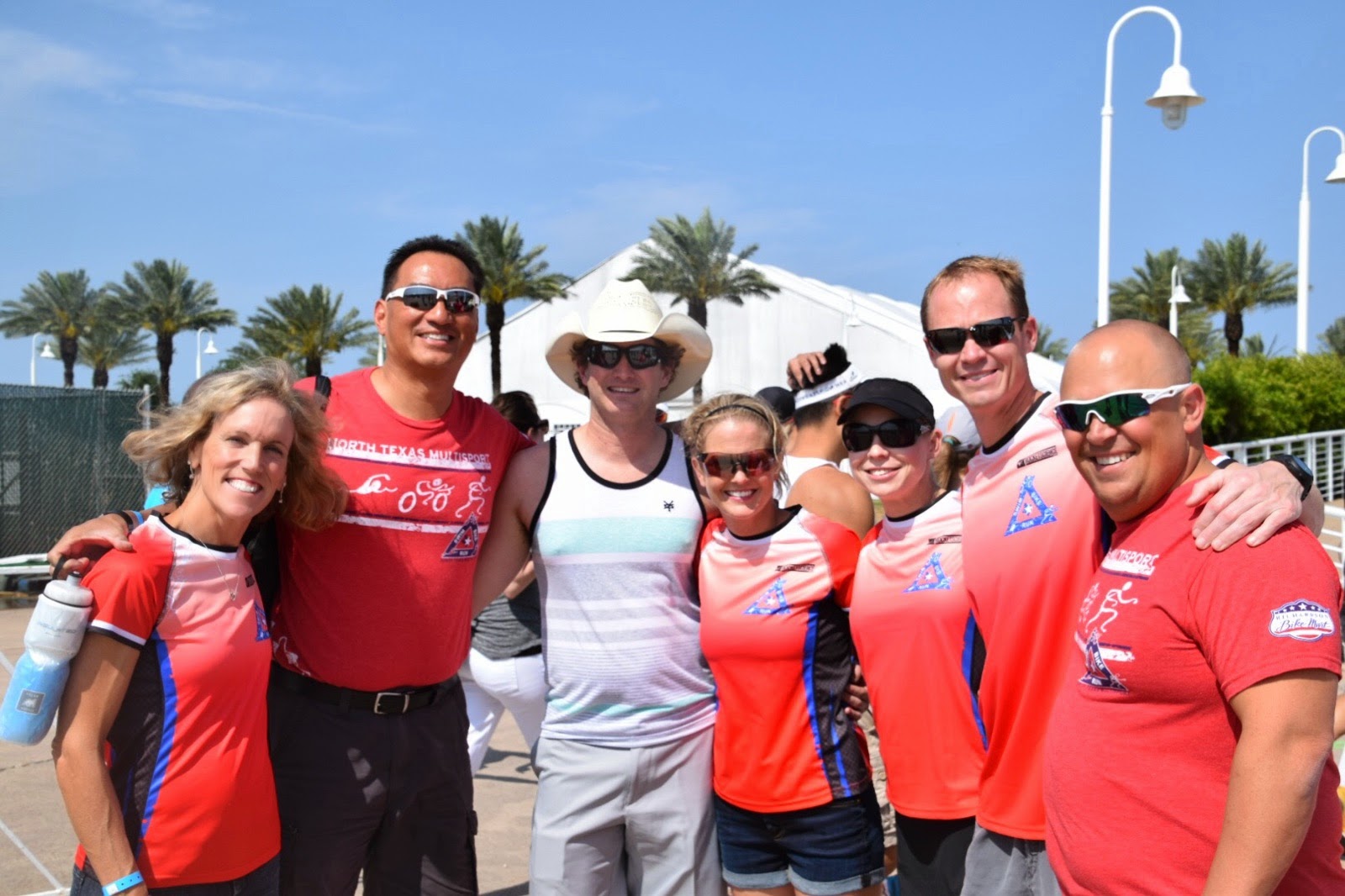 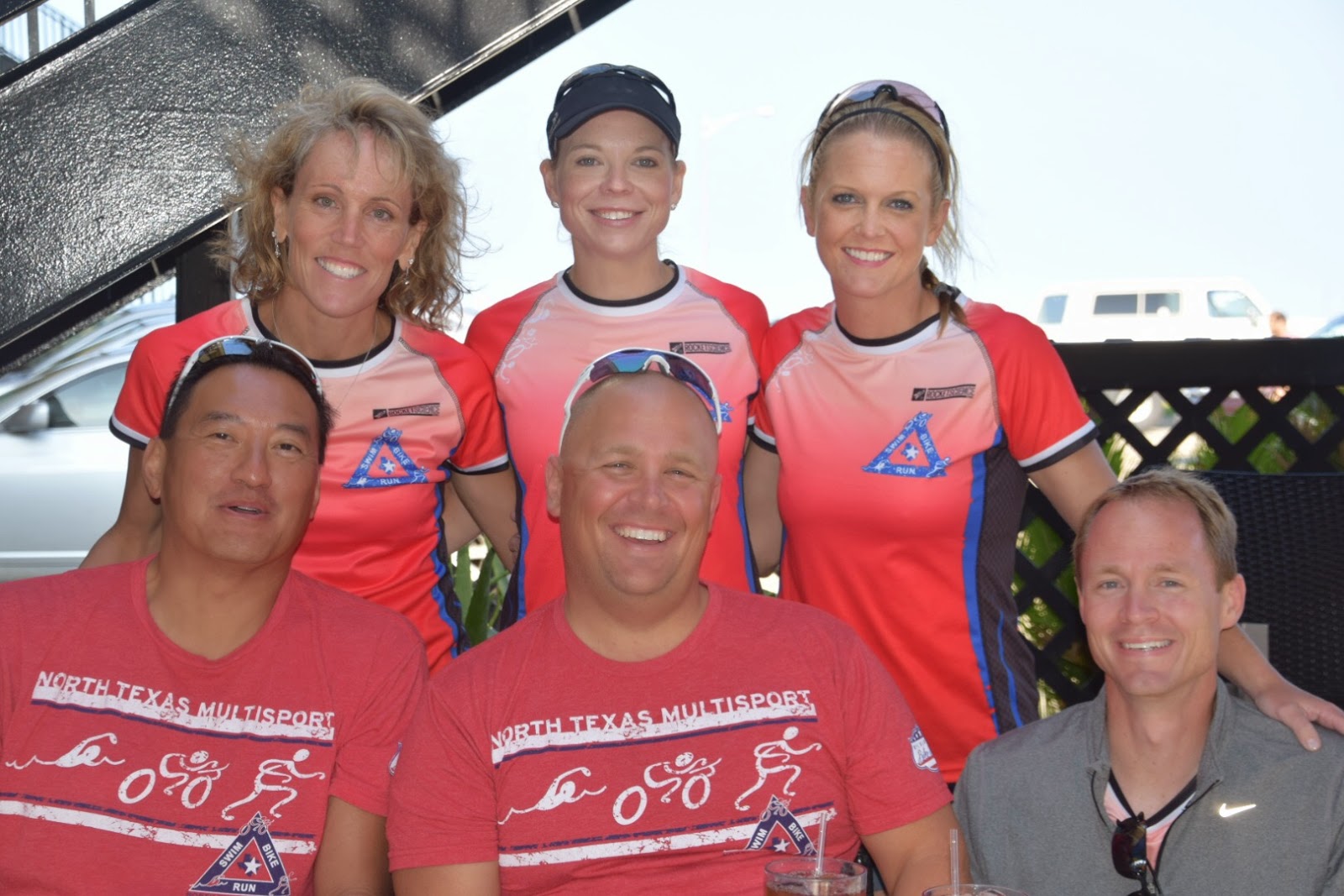 I wasn't nervous going into the race like I usually am. Even a sprint still gets me wired. But I was calm. Perhaps the recent decision to race for TEAM Ironman Foundation ($3,000 fundraising which benefits Ironman communities.., please feel free to donate to www.crowdrise.com/kristiowen) and race my first full Ironman in Chattanooga this fall terrifies me more than anything else at this point. Maybe I just felt prepared for the day. Training has been intense for our little group, both physically and emotionally.

Tons of teammates from my team and "sister" teams did the race, so it was HUGE to see friends on the course and cheering from the sidelines. 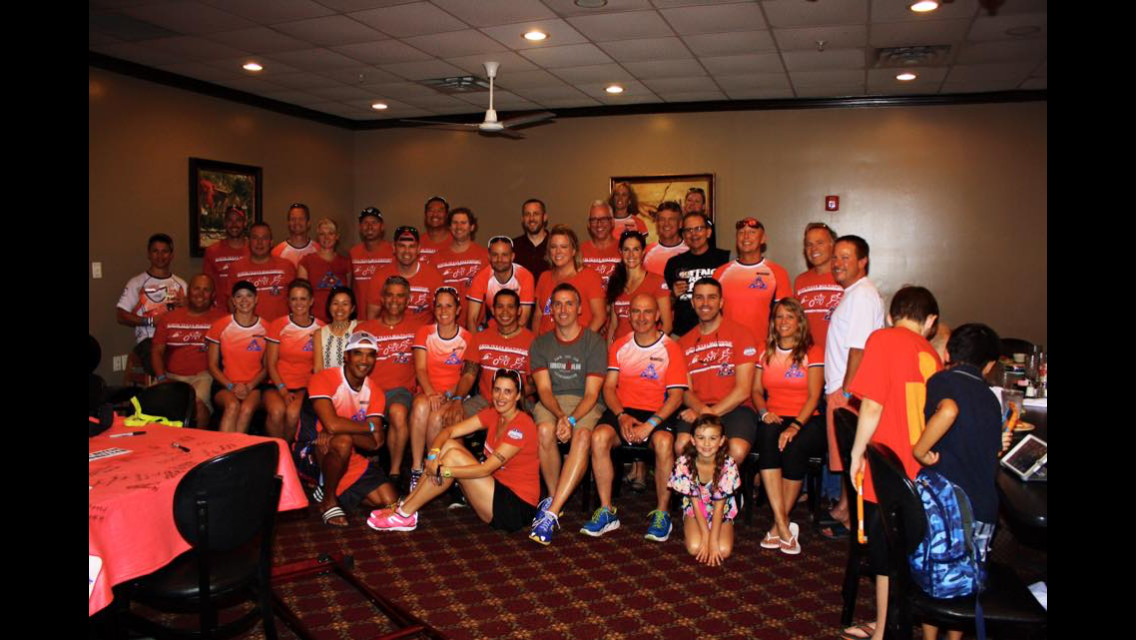 The swim: Race morning the water temperature was announced at 77 degrees. Not wetsuit legal, although a final wave was created to go last if you wanted to wear one. I didn't need it and didn't want to spend any extra time running in the afternoon sun, so I went off at 7:48 with my age group. My swim felt good. The salt water didn't bother me. I had a pretty clean swim, avoiding most other arms and legs. I think I sighted well, although my watch said my distance was 1.3 miles which is about an extra 175 yards. But coming out of the water I was disappointed to see a time of 41:08. That's about 6 minutes slower than I projected. Sure some of that time was due to lack of a wetsuit, but still a bit disappointed here especially given the minutes that would have mattered in my final time... this is the one area where I don't give time away. 30th out of 130 in my age group, the swim continues to be my strongest sport amongst my peers. 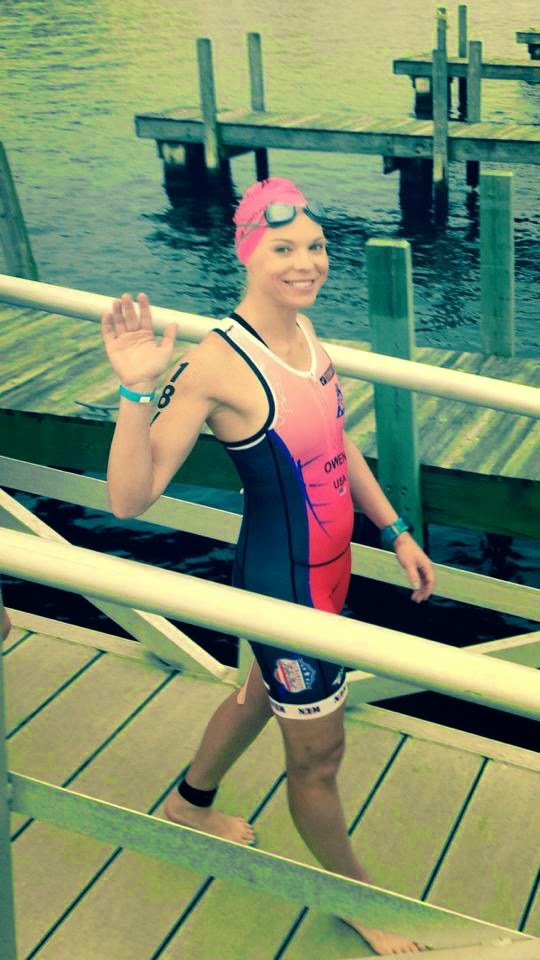 Saw Sheri along the swim exit, which was uplifting. Had a pretty solid transition, although it felt slow. I opted to leave my sunglasses in transition and only use the sun shield on my helmet. Good call.

The bike: There were a few miles of winding turns to get out of Moody Gardens and onto the seawall, which I took easy to get my heart rate down (by feel, since I had ZERO heart rate data or cadence registering on my computer- but I did have speed) and avoid anyone riding recklessly. Once we got to the seawall, I got into a groove and flew. It was flat with very little wind. What we did have felt more like a crosswind than head or tail. I averaged 20.6 on the way to the turnaround. I had to pay attention to my body since I didn't have any other data, but my legs felt good and I didn't feel like I was blowing up my heart rate. We had a steady rain for maybe half or more of the bike along with clouds for most of it. At one point I recall thinking the rain was stinging my skin a little, but didn't think much more about it. I've heard some mention of hail, so maybe there was some tiny hail! On the way back, my average dropped to 19.06. I felt an increase in wind for the last 8 miles or so, with most of it coming as head and crosswind. The later waves got that as a tailwind going out and headwind coming back. I ate half of a honey stinger waffle every 20 minutes for the first hour, then dropped it to half a waffle every 30 minutes after that. I used base salts for electrolytes, along with water and Gatorade from the aid stations. Nutrition and hydration plans worked. I averaged 19.9 on the bike overall, coming in 32nd in my age group. I never even entered a bike split that fast when I played the "how fast do I have to go to reach my goals?" game. I've certainly improved on the bike over the past 5 months, and had some nice speed on race days. In this race, I was most proud of my bike leg. Interestingly, my data did store on my computer so in retrospect I can see that my cadence was right where it should have been, but I ran a little higher than the plan on heart rate.

Transition went well again. I changed socks since mine were soaked from the rain. Grabbed my stuff and headed into the 3 loop run course.

The run: Ugh. The run. Always the run. I felt good at first. But the clouds were gone and the early rain left it even more steamy. I started out too fast, but ran pretty consistently for the first half, only walking at aid stations to get ice and gatorade. Then it was a battle to go aid station to aid station. I ended up having to walk between them at times. One bathroom break about mid-way... good job hydrating! Around 10 miles my stomach started to cramp and I didn't know what to do to get rid of the cramping. I walked. I took salt. I ate some potato chips. I just battled through it, watching my sub-6 goal slip away. I was so close, but just didn't have it in me. The looped course was good from the standpoint of almost always seeing friends and getting encouragement. I'm so thankful for those people. My run time was 2:26, dropping my age group rank to 43rd, where I finished overall. Top 1/3, I'll take it. Final time 6:02:36, a 34 minute PR over Austin 70.3 in 2013. 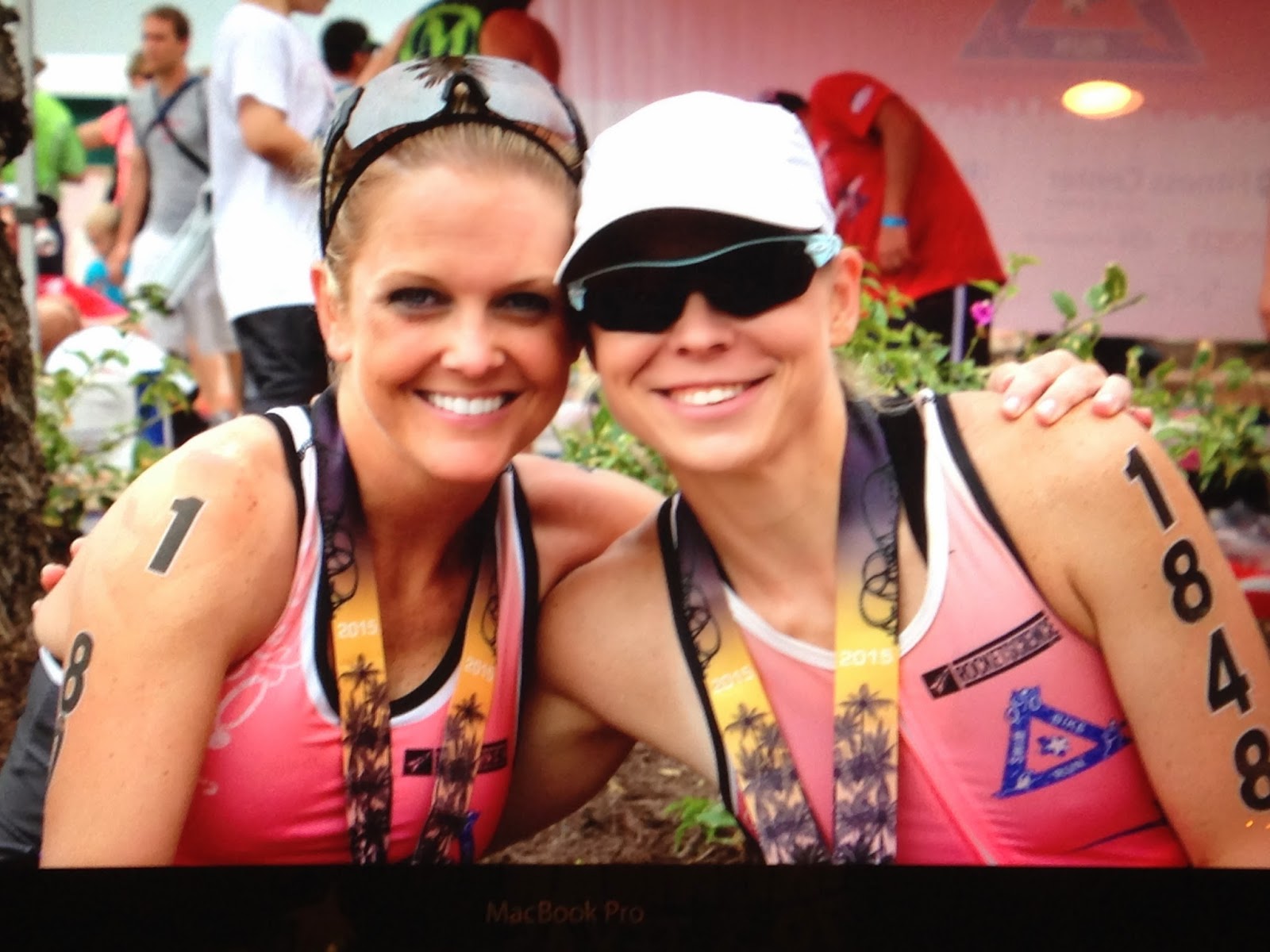 A few little races over the next month (I'll be the swimmer in a relay, sprint tri, and olympic tri) before everything shifts to Ironman Chattanooga.
Posted by Kristi at 9:52 AM